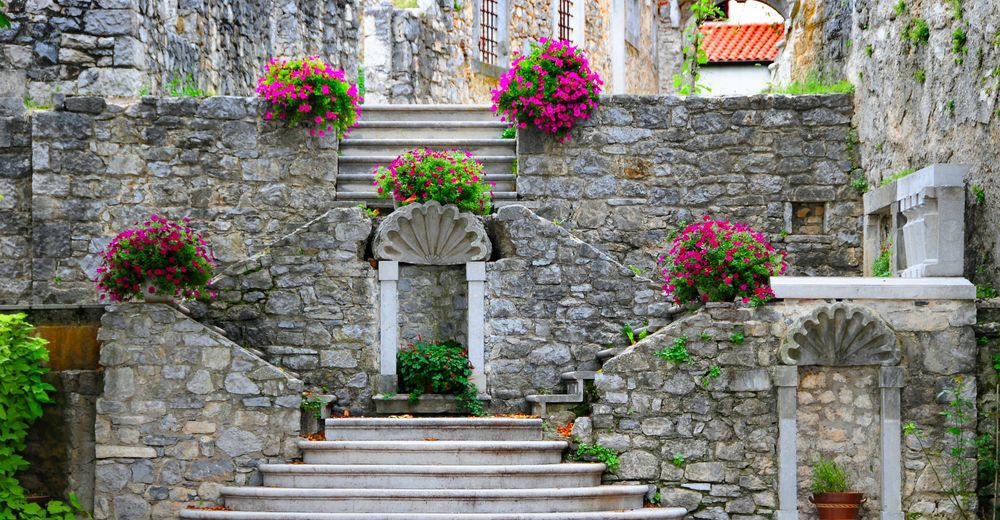 Stanjel - the jewel of the Karst region!

The Romans turned the top of the hill into an ancient fort, in the Middle Ages the village expanded over the hill, and later on the settlement was enclosed by defence walls to protect it against Turks invasions.

However, the most dominant features of the village are the Castle and the Church of Saint Daniel, which make Stanjel so remarkable. While walking through the narrow streets, the houses built in stone are telling you the story of stonemasons, who portrayed their experience of the Karst through stone. The streets end up in small squares, which were once popular meeting places for the youth and elderly.
Late Gothic St. Danijel's church was built in the second half of 15th century. Later, in the 17th century, particularly outstanding church tower was built. In its interior there is very interesting marble slab on the high-altar showing the image of the castle at the end of the 17th century. However parish Saint Daniel's church has two succoursal churches: The St. Gregory church and the church of St. Joseph.

Badly damaged during the Second World War, the part of the castle has been restored. The oldest remains of the castle reach back into the Middle Ages. In that time the castle was owned by the Counts of Gorica, then by the Cobenzls, and later on the ownership passed on to many others. In the 17th century it was rebuilt into a renaissance and baroque residence.

The Karst people always had to cope with the problem of the shortage of drinking water. A proof for that is also Stanjel with its numerous stone wells built in the squares. Very interesting is also the Romanic or Karst House with its ethnological collection.

You can experience the Karst from a different perspective in the renovated part of the castle. The castle's halls, where you can meet bridegrooms and brides on Saturdays, host a collection of the recognized painter and graphic Lojze Spacal.

While walking through the streets, you are also invited to visit the gallery in the exhibition tower with the gateway to Kobdilj and the small gifts’ shop. A very interesting passage from the stone village to the green surroundings is represented by Ferrari's Garden, a unique masterpiece of the architect Max Fabiani. You can continue your walk from Ferrari's Garden to Kobdilj on a path named after Max Fabiani, discovering the beauty of green surroundings.

Tower with gateway to Kobdilj became part of the Villa Ferrari in 1928. Enrico Ferrari was a well-known doctor from Italy, Trieste. There was a dining room on the first floor and a beautiful terrace on the roof. In 1944 the tower was half ruined. It has been restored and today there is a gallery in it with exhibitions and a souvenir shop on the ground floor.