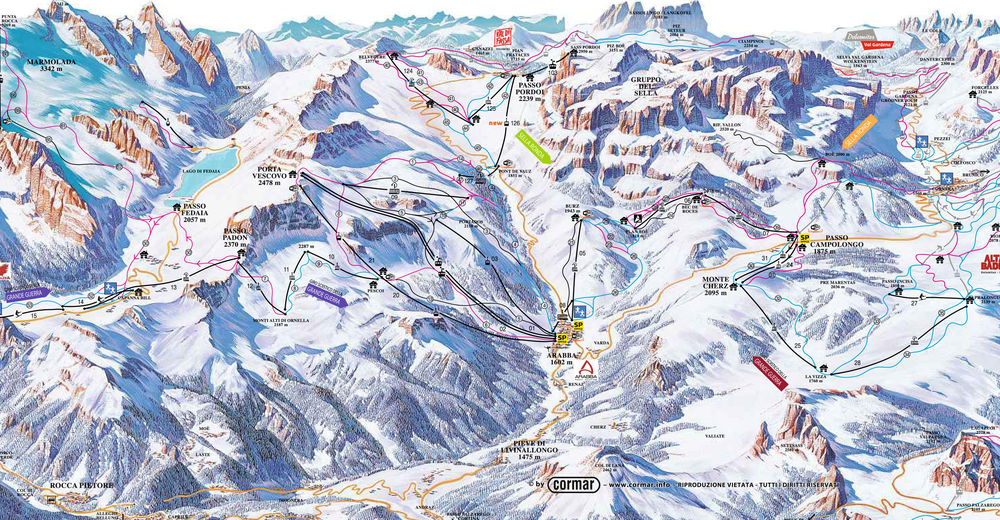 Surrounded by the most beautiful mountains of the Dolomites, there is the Livinallongo valley (Fodom in ladin language) , with its most important centre, Arabba (Rèba in ladin language, 1612m), overshadowed by the imposing Group of the Sella mountains.

Heart of the Dolomites, at 1602 meters of altitude, Arabba is one of the most charismatic villages in this range of mountains, ideal for unforgettable holidays both in winter and in summer.

Arabba is part of one of the most spectacular and attractive ski area in the world: the Sellaronda, which is, with its 40 km of slopes, the important link for the 4 surrounding Dolomite passes: Campolongo, Gardena, Sella and Pordoi. From the centre of the village the skier can easily get to the modern skilifts and slopes which are among the most famous in the Dolomites. It's also easy to reach, on skis, the popular ski runs of Portavescovo and Marmolada (3269 m asl), the last one known as the " Queen of the Dolomites".

The white Arabba with its 62 km of perfectly snow - covered slopes and 31 modern lifts is one of the most famous destination of the "Dolomiti Superski". Known as the ideal place for winter skiing and trekking and cycling in summer, Arabba welcomes its guests opening the doors of an extraordinary world where nature relax and sport lead to the seventh heaven.