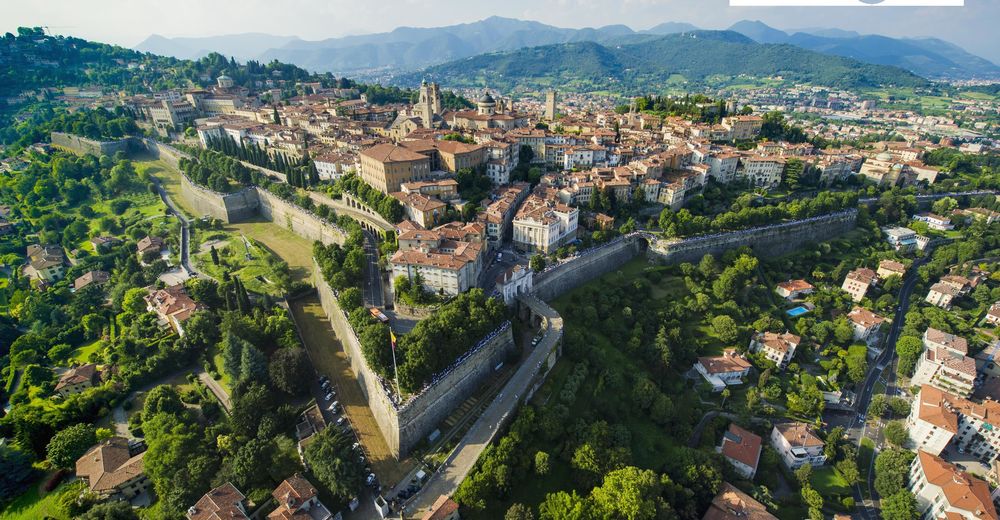 Bergamo is two cities in one: lower and upper, modern and old.
The historical nucleus is enclosed within the Venetian walls, which became a UNESCO World Heritage Site in July 2017, as part of the fortifications of the Venetian Republic. The mighty city wall measures over 5km and, since 1588, has protected upper Bergamo’s houses and monuments, many of them of medieval origin. In the middle of the city on the hill, the fulcrum of the old town, is Piazza Vecchia, of which the architect Le Corbusier said: "You cannot even touch a stone, it would be a crime".
The Piazza is home to the Contarini Fountain and a number of historic buildings: Palazzo della Ragione with the Civic Tower, known as the Campanone, from which you can enjoy an unparalleled view. On the opposite side is Palazzo Nuovo, now home to the Angelo Maj Library, with its vast heritage.
Behind Palazzo della Ragione is Piazza Duomo with the beloved Santa Maria Maggiore Basilica, a Romanesque-Lombard jewel with a baroque interior, containing precious inlays by Lorenzo Lotto.

There is a very special means of transport to reach the city inside the walls, the funicular. A cable car that from the centre of lower Bergamo, passes through the walls to get to Piazza del Mercato del Fieno. Built in 1887, it reaches a maximum gradient of 52%.
A second funicular takes us even higher! It connects Porta Sant'Alessandro - one of the 4 entrance gates into the Walls - to San Vigilio, the highest hill in the city. Here, in addition to charming restaurants and places where you can taste typical specialties and enjoy a breathtaking view, you can climb to the highest point through San Vigilio Castle, an imposing fortification, from which all the access roads to the city were controlled.

The upper town can also be reached by way of the historic staircases. Made from stones or pebbles with only pedestrian access, they are perfect for walk and to explore hidden parts of the city.

Going down to the lower part of the city, the more modern part, is Viale Vittorio Emanuele, a majestic, tree-lined avenue that leads to Porta Nuova, the centre of Bergamo where there are impressive buildings designed by the architect Piacentini at the beginning of the 20th century, the Donizetti Theatre, food and wine bars, shops with haute couture brands and artisan shops.

Do not miss the Accademia Carrara, one of Italy’s main art galleries, composed of legacies from private collectors. For over two hundred years it has been collecting precious artworks, now with over 1,800. You will be amazed by the beauty of the paintings including works by Moroni, Pisanello, Lotto, Botticelli, Tiziano, Palma il Vecchio, Canaletto, Hayez, Piccio and Baschenis.

Bergamo is a lively city, offering a rich program of events every year. It is the land of the great composer Donizetti, which is why the Donizetti Opera and the effervescent Donizetti Night are dedicated to him every year. The "Maestri del Paesaggio" transform the historic centre with their green design, Bergamo Scienza is the international festival that has been hosting scientists and Nobel prize winners since 2003, Bergamo Film Meeting or Bergamo Jazz Festival enliven the springtime. Every season has its big events!

Just 5km from the city centre is the Orio al Serio International Airport which, having become the third largest Italian hub for passenger traffic, connects Bergamo with more than 120 destinations.

Bergamo’s territory is a microcosm of opportunities: in addition to the city, there are lakes, rivers, mountains and valleys to discover and experience.

Lake Iseo is a jewel set amid the mountains, 30 kilometres from the city. Immersed in lush greenery, between art, culture, food and wine, it is perfect for a boat ride to Montisola, the largest lake island in Europe or for discovering its historic villages - Sarnico and Lovere - where you can enjoy romantic walks.
Lake Endine, the other lake in Bergamo, is the heart of the Cavallina Valley. There are several mansions along its shores: from the marvellous medieval Monasterolo castle to that of Bianzano, with its mysterious history that can be traced back to the Templars.

The valleys are perfect for immersing oneself in nature. In winter, they are ideal for skiing and snowboarding and in other seasons for mountain biking or walking: the Brembana Valley, the Seriana Valley and the Scalve Valley offer routes of varying difficulty. These valleys frame some small villages with great historical value, such as Cornello dei Tasso. The Tasso family was born here, who invented the postal system and exported it throughout Europe. A museum celebrates this invention and retains the Penny Black, the first stamp issued in the world. Or San Pellegrino Terme, home of Liberty style, with the Casino, Grand Hotel and the Thermal Baths: recently restored, offering relaxation and well-being in a fabulous setting.

In the Seriana Valley a cycle path starts in the lower part along the Serio river and ends in the upper part of the valley in Valbondione, passing through Clusone where a marvellous planetary clock has continued to work perfectly for 5 centuries. Monte Purito and Poieto are trekking destinations, as well as the Conca della Presolana, at the foot of the highest massif of the Orobie Mountains.
On the tops of the Orobic pre-Alps are numerous mountain refuges that can be reached by following spectacular itineraries surrounded by woods and rocks. It is worth mentioning the Orobie Path: a walking itinerary that allows us to circumnavigate the Orobie Alps linking mountain refuges and Bivouacs. Built between 1950 and 1975 by the Italian Alpine Club, it is a very important work from a naturalistic viewpoint.

In the Imagna Valley, Lombard Romanesque style has left its traces in Almenno San Bartolomeo at the Church of San Tomé, a temple with a mythical past, where legends of the Templars mix with pagan beliefs. A short drive away from San Tomé are other Romanesque churches, the Madonna del Castello, San Giorgio and San Nicola.
The Bergamo plain is an anthology of medieval castles, some still with a moat surrounding them for protection. They are ideal for cycling.

It is interesting to know that among the 53 Italian UNESCO heritage sites, as many as 11 are in Lombardy - the region where Bergamo is found - and 2 of these places are in the Bergamo area. The Venetian walls, which became a world heritage site in 2017 as part of the fortifications of the Venetian Republic and the Crespi d'Adda village: an exceptional example of a still-intact nineteenth-century workers' village. In this example of industrial archaeology, the workers of a large factory, owned by the Crespi family, lived and had all the services they needed: school, theatre, church, hospital, shops and public baths.
Not far from Crespi, the Adda Natural Park is home to the Alberone oasis: a protected area where several species of birds nest and where it is possible to take a trip on the ferry designed by Leonardo Da Vinci.

Bergamo boasts a prestigious culinary tradition and is named the "Capital of cheeses" as it has no less than 9 DOP cheeses!
Among the stuffed pasta dishes, try casoncelli and scarpinocc: the first is filled with meat, the latter with cheese. Served with Grana Padano cheese, melted butter and sage, they are incomparable.
Bergamo’s symbolic dish is without a doubt polenta, either served by itself or accompanied, there is no Sunday lunch that would be without it to go with braised beef, donkey stew or rabbit cooked in red wine. There is also a sweet version: marzipan covered in dark chocolate.
Even the water comes from Bergamo. The San Pellegrino spring produces the world-famous water. And wine? In Scanzorosciate there is the smallest DOCG in Italy: Moscato di Scanzo, a perfect dessert wine.

With all that there is to discover, how can you resist visiting Bergamo?