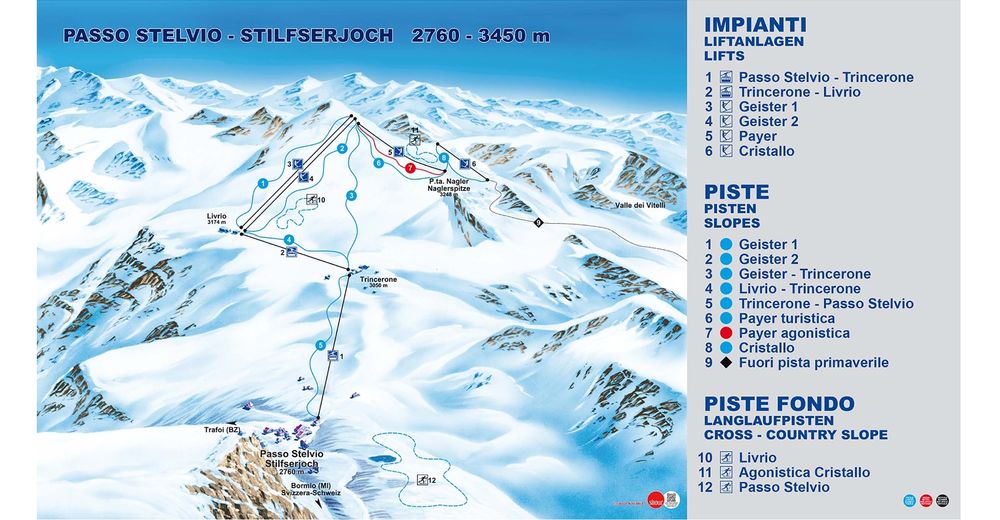 Welcome to the Stelvio for summer skiing

The Stelvio glacier is the largest summer ski area in the Alps and keeps its gates opened from May to November. Summer skiing on the slopes of the majestic peaks of the Ortler Alps is possible due to the altitude.
From 2758 to 3450 meters you find about 30 kilometers of ski runs - varied from moderate to light - at the Passo Monte Cristallo, which also use the professionell ski champs to pepare for the upcoming season.

The pass and the Stelvio glacier
10 lifts as well as a snow park welcomes all snow enthusiasts on the slopes of the so called "ghost peak". In addition, three different cross-country trails are offered with a total of 12 km: One right on the pass, two more up the middle of the glacier ski area. One of these is an extremely demanding altitude glacier trail at the foot of Monte Cristallo at 3,400 m.

The Stelvio Pass is known not only for summer skiing! The Stelvio Pass is also synonymous for ambitious cycling tours located along the sweeping panorama street - built by Emperor Francis II of Austria. Hikers enjoy the unspoiled nature of the national park, the network of hiking trails and historic sites, heirs of the 1st World War II with partially preserved trenches and fortifications.

A holiday on the Stelvio will really satisfy everyone. For relaxation, you are spoiled for choice: But one thing is certain, the rest & silence in the mountains will not be missing.